So Roger accepted my late entry to the forgotten heroes challenge so its full steam ahead for the final week. The other entrants seem to have picked up the pace and some have multiple entries.
I've finished the figure itself so it up to throwing some paint around. I've been doing some more browsing to check out the colour schemes and this is when I find that a figure does exist for Sandman in the heroclix range.

I' reckon though that my figure still meets the criteria as I am using a different model that I've based mine on and my inspiration is drawn from a different comic era.I was chatting with Craig and he tells me the figure I'm going for was from a 90s revival rather than the original 30s/40s version. 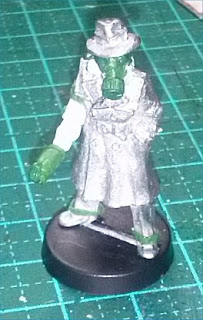 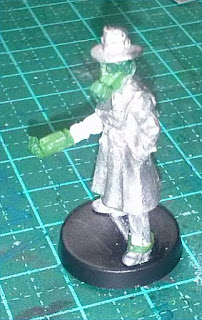 Definitely aiming for the black and tan version now. I've added a whiff of sleeping gas to his modifed weapon, some straps to his gasmask and cuffs to his trousers. I'm not sure about the cuffs though. I see them on some illustrations but not others - and I still haven't seen any cuffs on actual gangster photos on the very limited research I've done. I'll see how it looks with a bit of paint on...
Posted by HotT in the Lower Hunter at 08:28