How I made the Grell


The process took a couple of weeks to make the Grell with most of the time waiting for bits to dry overnight.

Standing on the Corner watching all the Grells go by...


So I made some Grell (or is it Grells?) out of Greenstuff because they're Great. And I didn't have any and I like the idea of them.

The Grell are done as far as I'm concerned. Just need to get around to painting and basing them. The bases are 25mm square so they're a reasonable size. I guess I'll just paint suckers on the tentacles or whatever. I'm not keen on the spiky bits on the ends of the tentacles in the latest D&D monster manual. Doesn't look right to me - and hard to reproduce at this scale with out being flimsy or bulky :-)
Posted by HotT in the Lower Hunter at 19:20 2 comments:


I had Vargouilles and Penanggalen mixed up in my head (see what I did there?) but I then watched a movie called 'Mystics in Bali' from 1981 that featured this strange vampire like creature. As I was making Vargouilles anyway I thought I'd make this one at the same time. 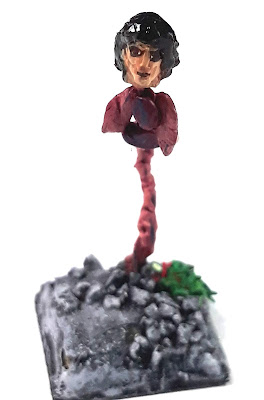 Like the Vargouilles, this is basically a head from the bits box stuck on some garden fencing wire and then the wire was wrapped in bits of green stuff to act as various internal organs.

Another cheap miniature ready to use in a future D&D (5e) game.
Posted by HotT in the Lower Hunter at 15:22 2 comments:

So I'm a DM for a couple of  D&D games at the moment (v5e). One group of characters found themselves recently in the infamous bowels of Undermountain. Their first encounter? Vargouilles. I didn't have any miniatures at the time so the ever-present goblins were pressed into service. Having never used vargouilles as an encounter before I found them to be unusual and fun so I decided to make some for future encounters.

Now I have a number of ghoulish/zombie/skeletal heads in my bits box, but no small bat wings. To make these I realised that the little squarish clips used to tie loaves of bread were made of plastic, and so could be used to make the wings. I have a feeling that someone has suggested using these before for model making but I can't for the life of me remember who it would have been but I would love to give them credit for this revelation as they are a great, free alternative to buying plastic card - for making small things anyway. 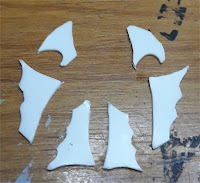 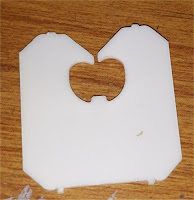 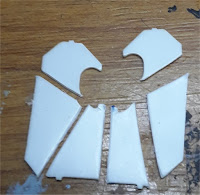 So after making the wings I selected the heads and cut little slots into the sides of them into which were glued the wings. Here's some GW zombie heads from years ago that I used.

Next I attached them to roughly 5cm lengths of garden fencing wire which was glued into the conveniently placed neck holes. I did use a pin vice to drill a bit deeper for some of the heads. 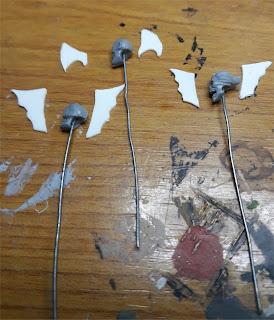 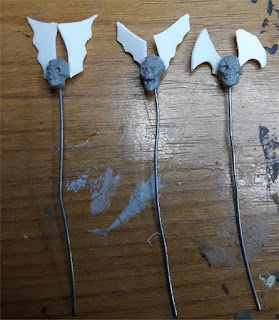 Next was to curl up the bottom ends of the wire so that they could be easily glued to some 20x20 stands using a glue gun. 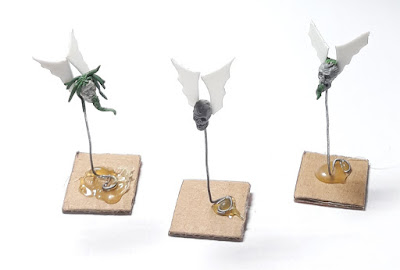 I then used a little bit of greenstuff to add the odd tentacle and/or rotting tongue, etc and then finally  painted them and finished the bases. 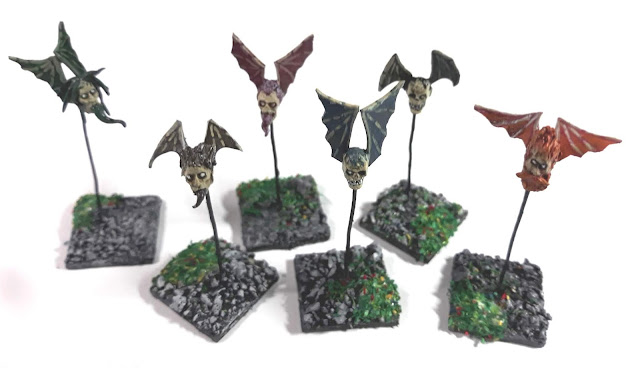 The painting scheme is inspired by this image. I'm pretty happy with them, especially as they cost so little to make.

As a side note I was pronouncing them as var-goo-eels. My father questioned this as the word looked french and so expected the 'll' sound to not be pronounced ie Var-goo-ee. We looked it up in wiki and found it was pronounced slightly different again. Having thought about it for a little while I reckon my Dad was probably right...this time...;-)

These Dungeons and Dragons monsters were pretty easy to make. I twisted two bits of garden wire around a pencil to make spiral shapes. One end of each I glued into the 20x20mm base after drilling some holes with a pin vice. I then drilled some holes into the backs of two GW plastic skulls I had lying around and glued them to the other ends of the spiral wire shapes. Then I put some greenstuff on the wire to make the trails of flames. 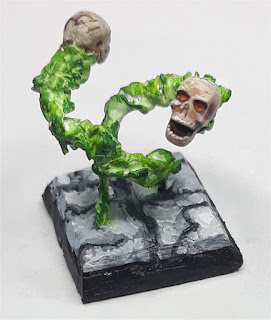 
So I saw a youtube on how to make stirges using plastic leaves and a glue gun. It looked really easy and surprisingly effective. I decided to make some stirges as well but with wire and greenstuff.

The wings were two little blobs of greenstuff with some wire snipped and pushed into them. I shaped the wings roughly into little diamonds and let them set. After they had set I held them between the wings with some needle nose pliers and bent the wings up a bit to look a bit more natural. 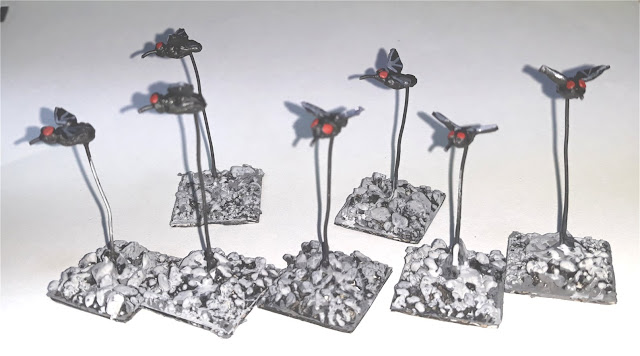 At the same time I snipped off roughly 50mm of wire to serve as a stand. I bent about 8mm of each end at 90 degrees to the stand. One end was glued to a 20x20mm cardboard square and with the other I wrapped some greenstuff sausage shapes, leaving a couple of mm poking outside the sausage to serve as the proboscis. I did a bit of prodding with my knife to form a round shape at one end for the head, a gap in the middle for where the wings will be glued, and then dragged the knife down the body from the head to the rear, so that it looked like it had some hair, and let the body hang out past the stand so it looked like the wire stand attached more toward the middle of the body. 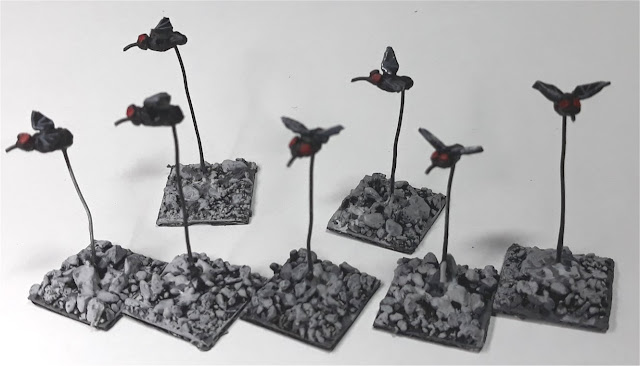 I let the body set and then glued the wings to the body. I got two tiny blobs of greenstuff and squashed them onto the head to form eyes and then painted the little beasts.

For a little bit more time and effort than Scotty in the youtube, I had me some stirges ready to swoop on the next lot of low level characters in my game. Looking at them now, I really should have just stuck some pins through some dead flies and be done with it ;-)
Posted by HotT in the Lower Hunter at 19:06 1 comment:

So I finally finished my snakemen. This was a project sitting on my bench every since I saw someone's post about converting GW plastic salmanders into snakemen. I thought I'd make them beefier by using Heroquest and Battlemaster plastic Orcs instead.

These started out by trying to find something to do with the extra greenstuff that I had made up for other projects. With the left over greenstuff I would do something to these figures like add a nose or some mail, etc.

I chopped off their lower halves and replaced them with some curled wire. I then built up the lower bodies with green stuff.  I built separate layers on the backs of the snake bodies which gave them a segmented look - don't know why I did this, maybe I was thinking of worms or maggots? 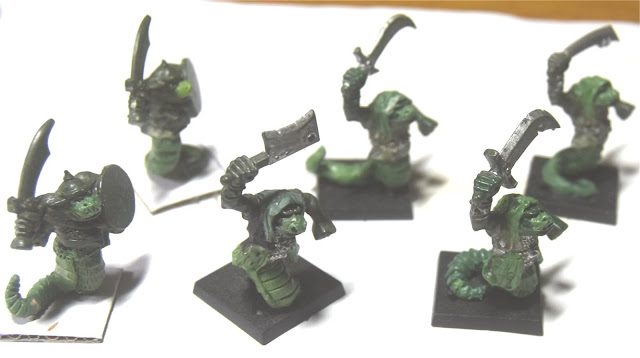 I also extended and and put hoods on the heroquest coats with greenstuff to give them a cultist feel. The two battlemaster figures ended up being guard types so I fixed their mail armour. On all of them I puttied the faces so they had more snakelike snouts. 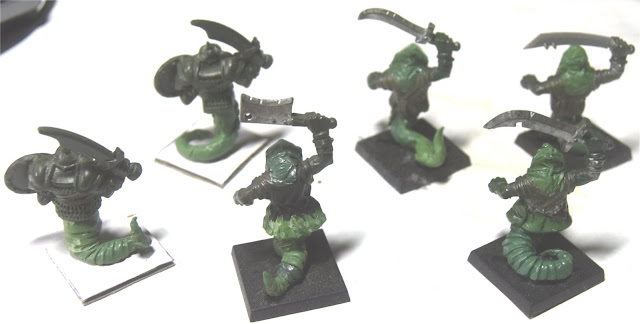 I didn't like the chopper on one of the figures - too Orcy - so in some kind of ironic move, I replaced it with a Heroquest Orc curved sword that I must have removed from some other orc miniature at some stage. 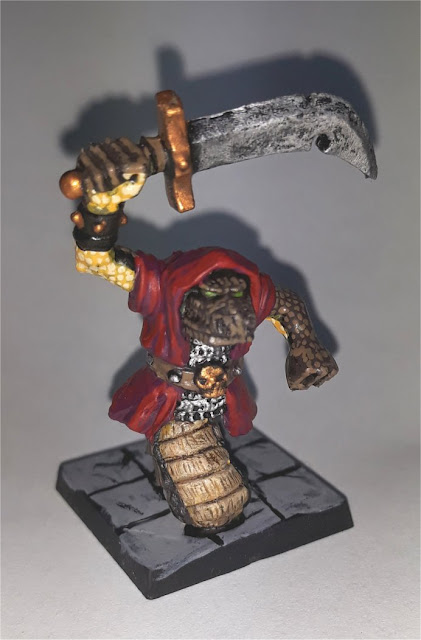 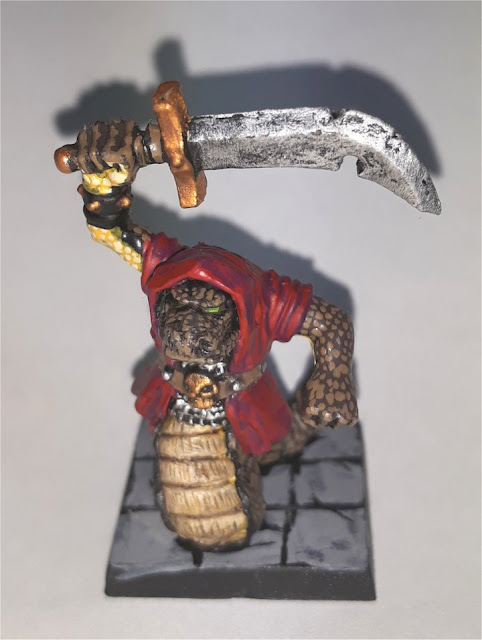 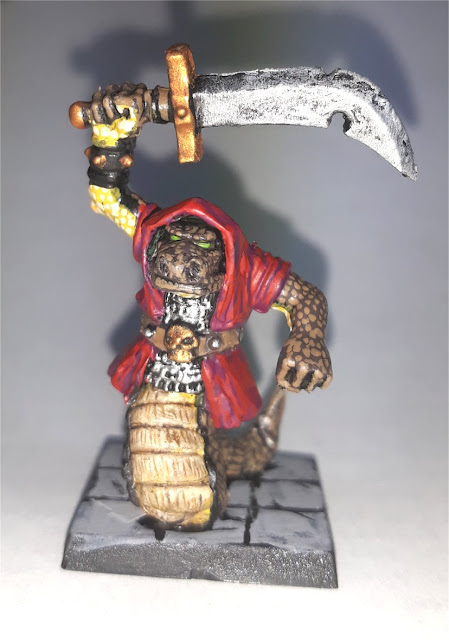